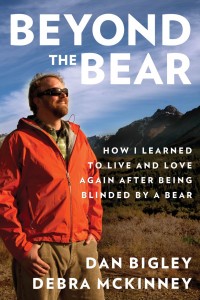 A 25-year-old backcountry wanderer, a man happiest exploring wild places with his dog, Dan Bigley woke up one midsummer morning to a day full of promise. Before it was over, after a stellar day of salmon fishing along Alaska’s Kenai and Russian rivers, a grizzly came tearing around a corner in the trail. Dan barely had time for “bear charging” to register before it had him on the ground, altering his life forever.

Until then, one thing after another had fallen into place in Dan’s life. He had a job he loved taking troubled kids on outdoor excursions. He had just bought a cabin high in the Chugach Mountains with a view that went on forever. He was newly in love. After a year of being intrigued by a woman named Amber, they had just spent their first night together. All of this was shattered by the mauling that nearly killed him, that left him blind and disfigured.

Facing paralyzing pain and inconceivable loss, Dan was in no shape to be in a relationship. He and Amber let each other go. Five surgeries later, partway into his long healing journey, they found their way back to each other. The couple’s unforgettable story is one of courage, tenacious will, and the power of love to lead the way out of darkness. Dan Bigley’s triumph over tragedy is a testament to the ability of the human spirit to overcome physical and emotional devastation, to choose not just to live, but to live fully.

The first chapter, which describes Bigley’s surgeon’s initial impressions and actions, is as fast-paced and emotionally charged as a best-selling medical thriller. Few readers will be able to shake the book loose after the hook is set.
Review by Rick Sinnott in the Alaska Dispatch. Click here to read more.

Praise for Beyond the Bear

“This book is surprising in so many ways — heartfelt, funny, buoyant, tragic, and triumphant — that after a while I wanted to do nothing else but read it and be inspired and enthralled. And so I was.”

—Kim Heacox, author of The Only Kayak  and Visions of a Wild America

“Combine a man shaped by an extraordinary experience with a writer adept at weaving the threads of his story and the result is a stunningly powerful book. Beyond the Bear may compel you to worry less about all the bad things that could happen in life and focus instead on embracing its possibilities. You might as well buy extra copies for you will soon want to give others the gift of this insightful and riveting read.”

“Beyond the Bear  delivers in gut-wrenching detail the harrowing account of one of the most horrific bear attacks in recent Alaskan memory, but the book is so much more than a bear mauling. Beyond the Bear is a powerful love story and an unforgettable tale of hope and resilience, a triumph of the human spirit in the darkest of hours. . . . Dan Bigley’s courage and heart take us all beyond the bear and along the way we all learn to see the world in a new and beautiful light.”

“Beyond the Bear is far more than another ‘bear chew’ book; it’s a compelling, finely crafted tale of survival and redemption, a worthy addition to Alaska literature.”

—Nick Jans, author of The Grizzly Maze and A Wolf Called Romeo

In this richly detailed, emotional memoir, Bigley retraces his harrowing journey of recovery, including the six surgeries it took to reconstruct his face. With the help of dedicated doctors, nurses, friends and family – including future wife Amber Takavitz, whom he’d met just before his accident – Bigley returned to health. His story inspires and sticks with you long beyond the final page.

Read an excerpt on the ADN website
Visit Dan Bigley’s website
Join Beyond the Bear on Facebook
See what other readers thought on GoodReads
Order Beyond the Bear Locally, on Amazon, Barnes and Noble, or iTunes