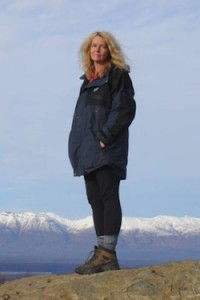 Debra McKinney is a fourth generation journalist, born into a family tradition that began when her great-grandmother, Emma C. McKinney, bought the Hillsboro Argus in Hillsboro, Ore., in 1904.

Once Debra got her journalism degree from the University of Montana School of Journalism, it was assumed she’d add her name to the masthead of the family paper. She took off for Alaska instead, where she staked mining claims and worked as a surveyor and a cook at remote, helicopter-supported, mineral exploration camps, and where she encountered her first bear, alone, inside a Quonset hut armed with a can of mosquito repellant.

As a long-time writer for the Anchorage Daily News, she has traveled to remote areas of Alaska. She won the Pacific Northwest’s C.B. Blethen Memorial Award for distinguished feature writing in 1994, and that same year, the national $10,000 Dart Award for coverage of victims of violence.

She was part of a team of reporters that won the Pulitzer Prize for the Anchorage Daily News in 1989 for its “People in Peril” series. Debra lives in Palmer, Alaska, with her husband, Paul Morley. In summer, they live at their off-the-grid cabin near Fairbanks, an oasis of simplicity powered by sun and wind.